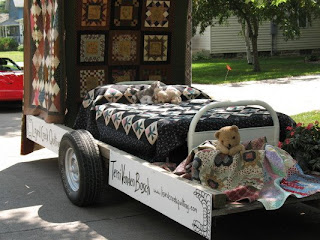 Well, Loren came up with a brilliant plan that we should advertise with a float for the Rally in the Valley parade. It took a bit of convincing--but I went along with it. Together we came up with a plan and then he built it for me--I think he did a great job. And yes--the college futon has changed it color again!!!
We wanted to have Josh drive the Honda--but he would have no part of this parade thing!! So we had Chris and Tanner do it--Jennifer's family from Texas. 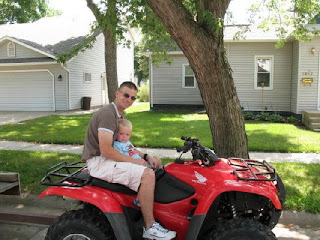 We were going to wear wooden walking sign boards with a real quilt on the front--but they were hard to walk in and really very unbecoming--in other words--ugly!! So we went with some "custom" made t-shirts instead--the back of mine read--I'm the Quilter!! 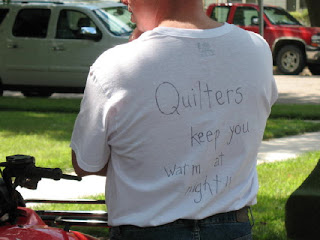 I told you--this was Loren's idea--and he was having a great time with it!!! The parade turned out to be a nice day--but no clouds--so the people were all crowed into the shaded areas on the sides of the streets--my side had more shade--and since I sometimes find it hard to do two things at the same time--walking and throwing candy--I think that I slowed down the parade some--as the float in front of us--was a block ahead of us. Oh well---that gave the people plenty of time to take down my phone number and web address, and me plenty of time to throw out buckets of candy. 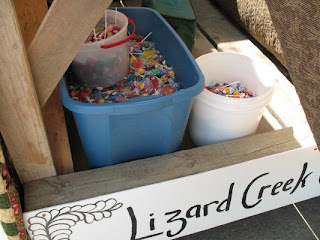 We will see if this works as an advertising plan--and if not--we have paid back to others for all the candy that our kids have taken in from the parades that they went to!! Will try and post some photos that Jeremy took when I get them from him. They had a nice day too--Brendan's BB team took first place and Maren took second place in the 6 y/o pedal tractor pull. 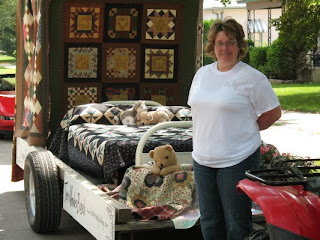 Posted by lizardcreekquilter at 2:52 PM

You go girl! Looking great at the parade!- (Lois just showed me your blog- and hers it's kind of fun to read.
Deb