Yep--it's been 13 years since I sent my little boy with a broken arm to his first day of Kindergarten at Rock Valley Christian School--and now look at him--he's taller than his Dad!!

And what a handsome man he has turned out to be!! 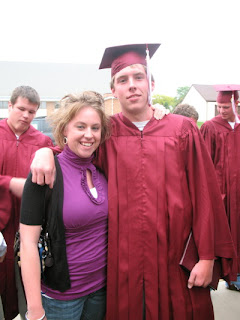 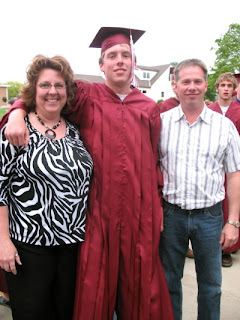 Ashely and Tyler made it to Western for the ceremony in the nick of time--but from Sioux Falls to Hull can take longer than you think!! Especially if you get a flat tire on the way!!
Posted by lizardcreekquilter at 3:24 PM No comments: 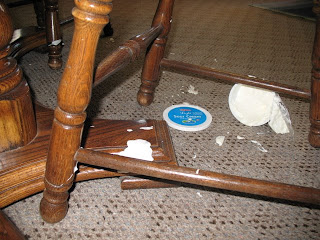 Ever just have one of those days?!?!?! Yeah just had the carpets cleaned and everything!! Nothing to do but clean it up and move on!!!

Email ThisBlogThis!Share to TwitterShare to FacebookShare to Pinterest
Labels: family

Now for some exciting and current news!!! Ashley has told me that she thinks that she doesn't exist in this family anymore because I never put her on my blog!! I tell her that's because she doesn't live here and I don't get any pictures of her. So for those of you wondering--she is a full-time 3rd year college student majoring in Interior Design, working a 40 hour week at Perkins and another part time job--plus try to have a social life. Apparently she inherited her father's love of work. We are proud of her that she is setting goals and working hard to attain them--and just generally in life. 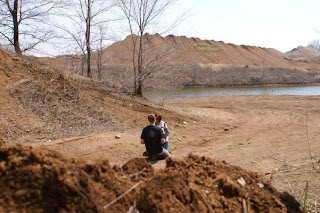 So she has been dating Tyler since right after high school--they fit each other nicely--she can be wound as tight as a rubber band--and he can just chill really easy like--so they should make a nice fit!!!..plus he is quite the romantic...had this whole thing planned nice for the proposal. There is a gravel pit nearby that they always go riding 4-wheelers and he had one of their friends hiding in a trench under a tree right where she could photograph the whole thing!!! He pretended that his quad broke down and Ashley had to go get help--when she rounded the corner she read the words spray painted on the sand pile. So neat--and Abbie got it all on film for them. 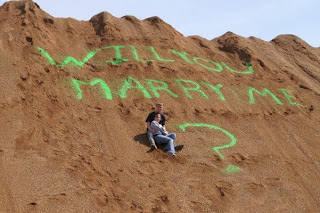 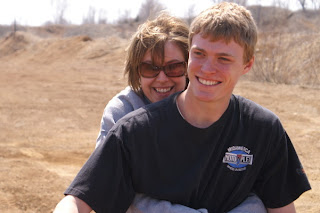 These are just a few of the 400 pictures that she took--I would say that you could actually make a movie with them all. They are thinking about sometime next spring after Ashley graduates from college. Welcome to the family Ty!! Love you guys lots!!!

"Someone has once defined love as "friendship that has caught fire."" --Bill Hybels

Wow is High Speed Internet fun--all these post in just a couple hours!!! I think I will try keep it a little more updated now--didn't know it would be this much faster than dial-up!!
Anyway this is another sweet little quilt... 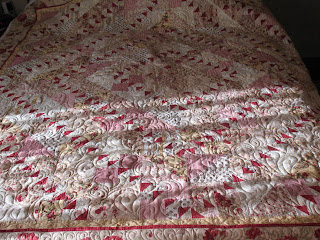 I put an allover "Curly Q" in the center and a custom job on the borderswith a double soft wave, hooked feathers, and ribbon piano keys. Was fun to come up with designs to compliment the softness of the fabrics in this quilt. The colors are a little closer to the photo below. 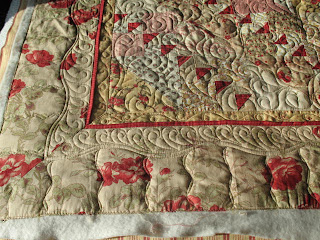 ...when you have children you should think about the stuff that they will accumulate before they decide to venture out into the world and live life on their own. Josh took WoodsII this fall and this was his final project. While I agree it is a great versatile piece--it still has to be stored somewhere. This is something that is is his room now though--except for one piece that works well as an end table by the couch. 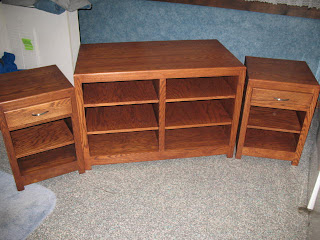 He did a great job on this and can't wait to have his own place someday so that he can use it!!
Posted by lizardcreekquilter at 4:49 PM No comments:

Email ThisBlogThis!Share to TwitterShare to FacebookShare to Pinterest
Labels: family 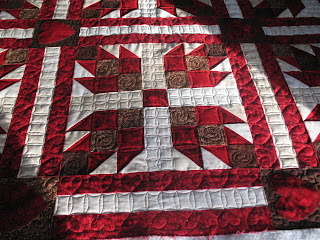 This was a fun customer quilt I worked on in February!! The block pattern is called Bear's Paw--and the coloring and position of the chocolate brown squares looked like candy chocolates in a box--so I called it "Paws Off My Chocolates" while I was quilting it. Cute little quilt!!!
Posted by lizardcreekquilter at 4:44 PM 1 comment: For the last 4 years, Lois and I have treated ourselves to a 3-day get away!! The last couple years it has been at Cedar Shores Resort in Chamberlain, SD.

Nothing but sewing, laughing, and eating food somebody else made for us!!! 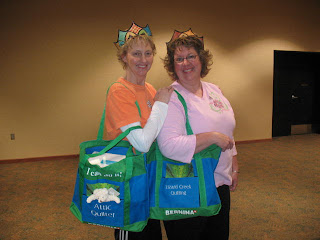 We come with all our projects ready to go. Set and organize our space. Plug in our machines. Then sew until our eyes get blurry or we run out of projects--whichever one comes first!!!

We each made up a crown from the pattern we bought at the Des Moines AQS show. The pattern is from http://www.detailsbydiane.com/ We actually would put it on when we woke up in the morning and not take it off until we went to bed. Got a few strange looks through the hallways in the resort--especially when we walked past the Budweiser convention--but we persisted in proclaiming that we felt like queens for the weekend!!!

Posted by lizardcreekquilter at 4:01 PM No comments:

This past fall--after football was finished, Josh and his friends had to find some other activity to fill their time with--they decided to build an ice shack--not just any shack--but one large enough for 7-8 people!!

So for several weeks they would meet in K & O in Hull to build this thing--they each brought scrounged items from home and pooled about $20 each for insulation and came up with a great finished product. 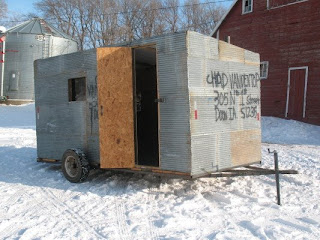 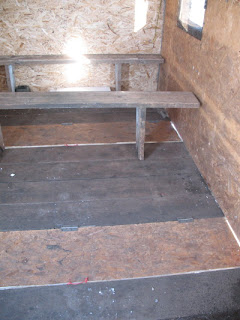 The first Saturday after it was finished, some of the builders pulled it out to Lake Pahoja and used it for 1 hour--with no fishing sucess--they put out the fire in the wood stove they built and went home. Sunday morning in church someone told Chad that his ice shack was a burned up pile of rubble... 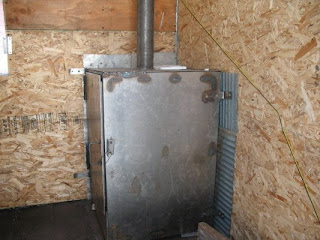 ...this wood stove they built--possibly the culprit?!?! When Josh and 2 other guys arrived at the scene--there was little left but the steel. He was quite upset for a while--as he never even got to use it..but there is always the possibilty of building something else with those guys.
Posted by lizardcreekquilter at 3:34 PM No comments:

Just a fun little quilt with colors that make Spring feel too far away... 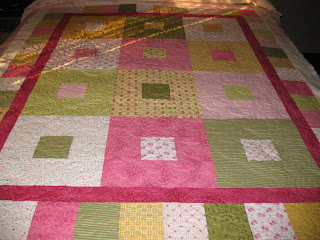 ...and the back--I put a design called "Wonky Feathers" on this one--just a whimsical and fresh feel. Enjoy!!! 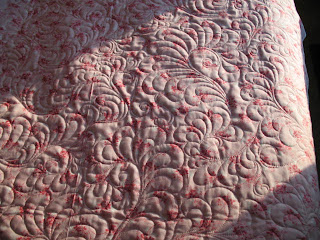 Posted by lizardcreekquilter at 3:24 PM No comments:

Over Christmas break--Josh hadn't secured an afterschool job yet--he has since started at the new Bomgaar's in Rock Valley and is totally enjoying the retail experience that he is getting.

Ok--back to the subject Terri. I was busy in the studio and Josh thought he needed Monster Cookies--don't know where that thought came from because that is one cookie that I don't think I ever made--maybe why he wanted them--so I found him the recipe--and left him to do the rest. 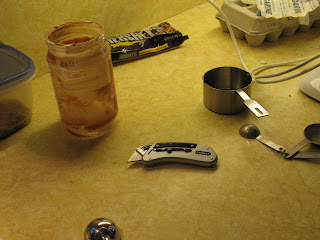 When I came to check on him...this is what I found on the counter!!! Who would have thought about using a pocket utility knife to open your packages--certainly not me--I think a kitchen scissors is the appropriate tool for that job--but apparently not when a man is working in the kitchen. 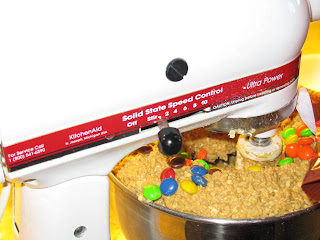 The cookies turned out delicious and the Sunday night gang that comes over thought they were delicious!!
Posted by lizardcreekquilter at 3:08 PM No comments:

Well--since I was informed by several people that I haven't updated you all on my life for a while--thought I would start where I left off--and go from there...opening deer season was on Josh's 18th birthday--so before he left at 4:30 in the morning to go sit in a tree stand I told him if he got a buck we would mount the antlers for his birthday gift. He told me it was some kind of skull mounting--not really sure what it was--but the price was reasonable--so that became the plan... 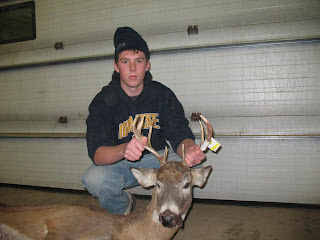 ...so he got his wish--only one of the 3 bucks that they saw that day--so he was pretty pumped about it all. He then brought the head to Bakker Taxidermy in Doon to get mounted and the meat to Hudson Locker to get made into jerky and pepper sticks--which he has picked up and says is delicious!!

Now fast forward to last week--when he came home with the finished mounted skull--and he decides that if he puts it up in his room where I thought it was going to go--that no one would see it--so after a "Please Mom"--it now has a place of residence in our one and only family room.

So I stood in the entrance into the room and Loren held the head up in several places until we found the corner that felt right--not really hidden--but also not right in your face. 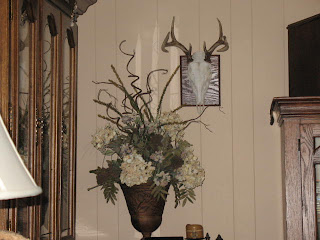 So since I now have added dead wildlife to my decor and family--he needs a name--and Dave it is--Dave the dearly departed deer!! Josh isn't too sure about me nameing his deer--but he is greatly appreciative of the placement for him--and is already contemplateing where....the pheasant will go!!! We will have to see about that!!!

Posted by lizardcreekquilter at 2:42 PM No comments: