So Ashley came home for Western's homecoming and since Josh had to be part of the Mr. Spirit at the pep rally, we decided to go to school to check it out. Well apparently school doesn't pay close attention to the time it gives for events--becauses we were there at 2:30--when they said it was going to start--and he had already done his thing!!! So we missed it. 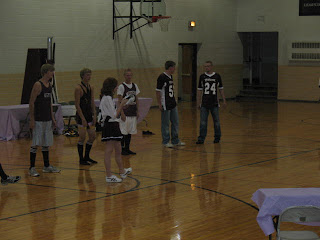 Josh and Colton were the football representatives--but one of the cross country boys was the winner. He was all dressed in a crazy get-up--and the football boys were just there as football players. 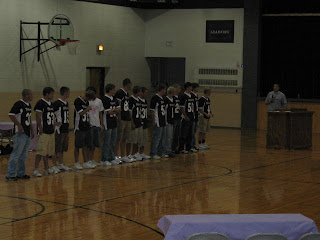 Here is the senior players being thanked by Coach Kooima for putting forth some excellent leadership skills so far in the season. After another skit with the players and some rousing cheers by the cheerleaders, the rally ended with a prayer for safety for all the players involved in the evening's game.
Posted by lizardcreekquilter at 8:10 PM