So, the game tonight was at Sheldon--for their homecoming. Since the football program started at Western it seems as if we have been the team of choice for schools to pick for their homecoming opponent!! But tonight, schools may have to think again on that. Our team came out ready to play some football tonight. Sheldon scored first with a quick little run, but missed the extra point. Several plays later we answered with a nice little run into the end zone--but we made the extra point--could be because the line gave the kicker enough time--and held their man?!?! Anyway--the rest of the game was some hard fought defensive playing and it came down to the last 45 seconds when we stopped them at their 5 yard line!! Or at least that is what I think it was--I was so excited I could be a little off with my stats. 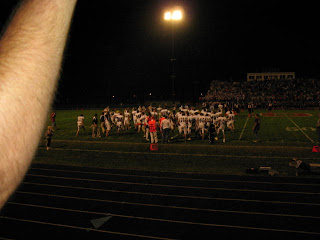 And that is what a pumped up football team looks like after beating one of the school's largest rival on their home field at their homecoming!!! The final tally for the game was Wolfpack 7 and Orabs 6. Way to play boys!!!
Posted by lizardcreekquilter at 10:55 PM